For the first few years of our marriage, Novembers were pretty momentous: a marriage, our first home and all three of our babies came in November. Now we celebrate all month long. This year we celebrated our sixth wedding anniversary, the fifth year in our home, Isaac’s fourth birthday and the twins’ third birthday–not to mention birthdays of a grandma, a great-grandpa and an uncle. Oh yeah, and then there’s Turkey Day. This year we also welcomed a new little cousin to the month of festivities. We were sad we could only make his acquaintance via pictures and Google hangout.

The top accomplishment of November 2014 was potty-trained twins!

This was the third attempt and it finally took. Disney on Ice was coming to Salt Lake on Isaac’s birthday. We decided that would be a good birthday gift for him so about 6 weeks before the event we told the twins we’d take them to see Buzz and Woody too if they learned to go potty. It was a good incentive and the boys caught on much quicker than I expected them to. I was so happy and grateful!

Disney on Ice was SO FUN. The boys helped me decide on having a Toy Story birthday this year so it was very appropriate. We rode the train up from Thanksgiving Point and they were super impressed.

During the show we got to see Mater and McQueen first—which was awesome (Ariel and Tinkerbell in the middle—which was just ok) and the whole second act was basically Toy Story 3. The boys were in heaven. And of course for dinner there was pizza.  After all that we still got to take the train back home. It was a fun birthday celebration.

We had a couple of family parties later in the month complete with Toy Story cake, decorations (Isaac insisted), gifts and photo ops. 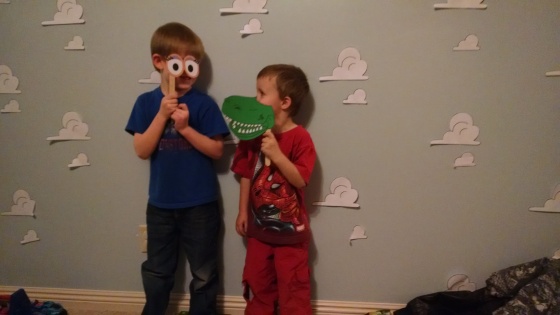 After all of the birthdays were over, Derek and I took off for a lovely anniversary weekend in Salt Lake. Every year we pretty much do the same thing: see the newest Hunger Games (it always coincides with our anniversary), eat at Settebellos (the restaurant from our first date), get a massage and do a little shopping. This year I got our movie tickets in the VIP theatre at the Megaplex in Sandy. I had heard about it a few times and thought we’d splurge. I’d probably make sure we got the recliners next time. The seats we got weren’t all that great. The experience was fun though.

We spent Thanksgiving with my family at Grandpa Hitchcock’s new house. It was just a few of us and it was really nice. Plus turkey and mashed potatoes are my favorite. We have a lot to be thankful for. I am grateful for a good husband, a warm home and three beautiful children. I love that we get to celebrate these blessings right before Thanksgiving every year.

One thought on “November Holidays and Happenings”